Jeremy Porter and The Tucos 7″ Pre-Order

AUGUST 2022: Jeremy Porter and The Tucos along with GTG Records announce the release of their new single “Tonight Is Not the Night” b/w “DTW” on 7” limited edition opaque red vinyl! This is The Tucos’ sixth 7” single and their first release since the 3-CD career retrospective Bottled Regrets: The First Ten Years.

Street date for the vinyl is September 9, 2022. Pre-Order, more info and fall tour dates over at Jeremy’s site! Michigan folks – come check it out for the first time at The Avenue Cafe on August 26 – the same show as the release party for A Rueful Noise! It feels great to wrap up the summer with new vinyl, keep ’em comin.

Posted in A Rueful Noise, Jeremy Porter and The Tucos

Pre-order the debut 7″ from A Rueful Noise now!

This is a great moment of DIY record label community – we’re releasing the 7-inch with our pals in Silver Maple Kill Records (our first official co-release with them in more than a decade!), the band consists of friends from many of our extended family projects like Scary Women, Jackpine Snag, Hat Madder, etc, and Jeremy Porter himself produced the songs with engineering assistance by Gabe from the Tucos. Releases like this are what it’s all about – and the music itself is a compelling blend of moody alternative rock with rich vocal harmonies and engaging instrumental arrangements.

Release party August 26 at The Avenue Cafe in Lansing!

Posted in A Rueful Noise, GTG Activity, Jeremy Porter and The Tucos, Lansing, The Hat Madder

The obvious lead thought here is that The Wild Honey Collective Volume 2 is now available digitally and on CD. I’ve been chipping away at this project since LAST July so it looks like I need to find a new hobby. Or, a new volume. Check it out on all the streaming platforms – vinyl pre-orders are still happening too, fingers crossed our September projection for that release holds up. We’re celebrating the release of the new album with a few things this month, starting with a 6:45 set TONIGHT at Smiling Acres Music Festival in Trufant, MI. Then we’ll be all the wau up (UP) in Copper Harbor, MI later this month, before a certified weird GTG Revue tour will take a few Wild Honey folks and a few Harborcoat folks on the road at the end of the month. But, that’s later. Let’s check out the general show calendar for all the GTG-ers this July:7/1 – The Wild Honey Collective @ Smiling Acres Music Festival (Trufant, MI)

Not bad for a mid-summer run! So, as mentioned above, at the end of the month we’ll be doing The Wild Honey Collective Featuring Harborcoat Tour 2022, following the lead of the run we did last fall with Jeremy Porter. For this tour Tommy (me), Danielle (my wife), and Adam (my Aymor) will be joining up with Matt and Joel from Harborcoat and whoever else gets in the van to do a revue and supergroup through the Midwest and up to New England. Matt will do some songs solo, we’ll back him up, he’ll play some songs with us, we’ll do some string band stuff, some electrified stuff, on and on it goes:

Summer tourin! We love New York (state)! Looking forward to it very much…

In other news, Narc Out The Reds is on track for a fall release, Bank Of America is set to begin album recording sessions this month, Cavalcade is havin’ at it, A Rueful Noise will have their debut 7-inch out in August, and Jeremy Porter and the Tucos will hopefully have their latest 7-inch out by year’s end. And…

Those two shows are part of the Capital City Film Festival 2022, which includes a series of six shows at The Avenue featuring artists like Chirp, NWRH, Ozay Moore, James Gardin, Lipstick Jodi, Mark Lavengood, Jen Sygit and more from 4/7-4/16. Read about the fest in general here and check out their whole schedule of movies and music here.

Does that cover it?? Lots of shows! Great stuff. As always, folks are in the studio and GTG Family label Phonophore Records just released a tribute to Guided By Voices featuring brand new recordings from The Stick Arounds, The Plurals, Jeremy Porter and The Tucos, Harborcoat, Isaac Vander Schuur, The Wild Honey Collective, Gumsmack, A Rueful Noise, The Soods, No Skull, Cutlass Supreme and many more… 23 tracks!

Posted in Jeremy Porter and The Tucos, Tour

Lots of great events at our home base of The Avenue this month. Thursday November 4th features GTG family Mistic Mountian (Nich Plural, Blaine “And His Keyboard”), and LoLo (Pudvay, Hunky, Knights, et al), November 5th is a sticky sweet Stick Arounds night, November 12 features the first-ish show by Cutlass Supreme (Frank and Earnestish), November 24 will have a cover band of Baratonos, Plurals, Aymors ‘n such, and every weekend is chock full of a wide variety of music! Whoo!

Posted in Blaine and His Keyboard, Frank and Earnest, GTG Activity, Narc Out the Reds, The Hunky Newcomers, The Stick Arounds

GTG Fest 2021 Sampler is live! Check it out and get ready for GTG Fest XIV this weekend at The Avenue and the Record Lounge!

Posted in Drinking Mercury, GTG Fest, Jeremy Porter and The Tucos, Narc Out the Reds, The Hunky Newcomers, The Plurals, The Wild Honey Collective 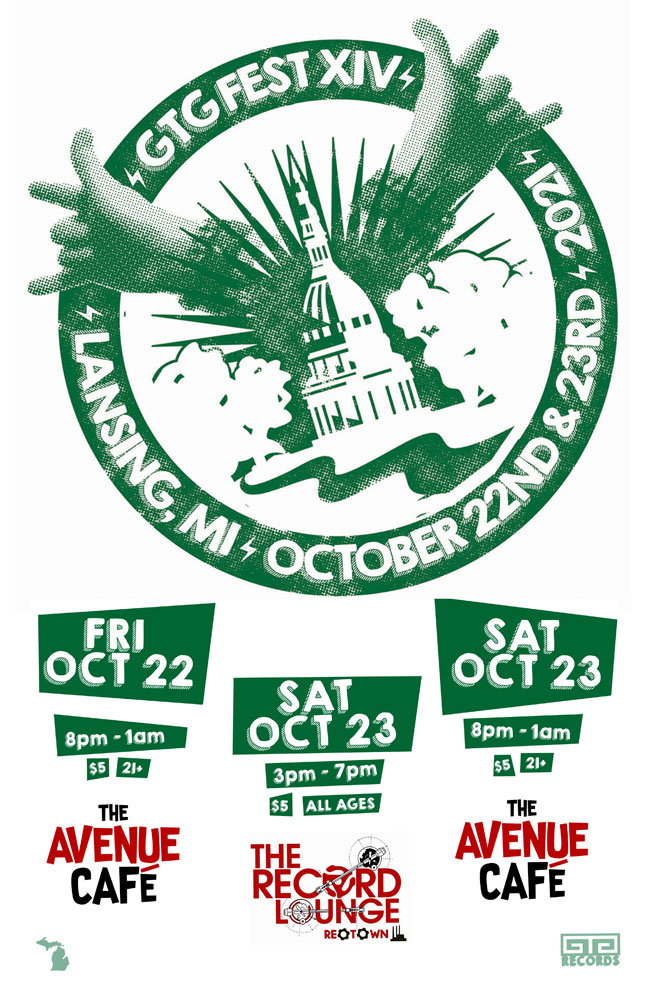 GTG Records’ annual celebration of independent music and community is back with events in Lansing, MI on Oct 22 and 23.

A Rueful Noise
Jeremy Porter and The Tucos
KIND BEAST
Bank of America
The Wild Honey Collective & Cutlass Supreme
All venues are limited cap. Be vaccinated!

Posted in Drinking Mercury, GTG Fest, Jeremy Porter and The Tucos, Lansing, Narc Out the Reds, The Hunky Newcomers, The Plurals, The Soods, The Wild Honey Collective

This October a unique version of The Wild Honey Collective led by Tommy and Danielle will hit the road, featuring Jeremy Porter (who will also play solo in addition to accompanying the Wild Honey set on lap steel, mandolin, and guitar) and Nicholas Richard. This tour is hitting a lot of new spots for this GTG crew, so while the tour is officially designated to promote The Wild Honey Collective Volume 1 and Jeremy Porter and The Tucos’ Candy Coated Cannonball, given the unique band lineup and that this is the first proper extended GTG artist tour in 2 years(!) it’s safe to also expect some Plurals tunes, a variety of covers, and some collaborations with other friends at certain shows. Dates are all listed above and there’s a full event thing going here. NY, VT, ME, PA, NJ, OH…. we’ll see you out there!

Posted in Jeremy Porter and The Tucos, The Plurals, The Wild Honey Collective, Tour

Local Lansing folk will probably be hip to this now, but GTG is more-or-less booking and promoting the majority of the music at The Avenue Cafe these days. Here’s what we’ve got for the whole month of August:

That’s a good run there, eh? We’ve got the first full-length show by The Wild Honey Collective, the first public Lansing shows from Cavalcade and The Plurals in at least 18 months, a record release by the Cartridge Family(?!?!??), GTG Fest familiars like The Ryne Experience, LVRS, and Marsha, Mike Reed from Small Brown Bike… great stuff all around!

Shows are getting to be a little more commonplace – on top of the above listed we’ve got The Plurals playing Taste of Michigan City (Michigan City, IN) the afternoon of August 7, The Wild Honey Collective play from 5-9 at the Beer Garden at Horrocks Farm Market in Lansing on August 21 as well as an afternoon slot at Sundried Music Fest in Mason on August 28, and then The Stick Arounds take the Horrocks stage themselves on August 28 too. All of these events are free and promise great times. We need ’em! Stay safe out there everyone, masks are still a good thing!