Harborcoat “Joy Is Elusive” OUT NOW

Check out a release show too:

The phrase “Joy Is Elusive” appeared in Harborcoat’s Matthew Carlson head one day, and the singer/songwriter/guitarist wrote it in black Sharpie on a piece of paper and tacked it to the wall above his studio computer. Those words became a conceptual signpost for the Harborcoat’s sophomore album, aptly titled, Joy Is Elusive.

“Not that joy doesn’t happen, or that we can’t find a lot joy in life and work, but it seems it can be difficult to find these moments and hard work to sustain them,” the Lansing, Michigan artist shares. “I’ve struggled with depression and anxiety all my life and it has always crept into my songwriting as a sort of veiled subtext. With this new batch of songs, I made a conscious effort to write about it more directly. They aren’t mopey or deliberately maudlin, but I think during these times people are feeling a lot anxiety, depression, and they have been grappling with isolation. These topics are part of the human condition.”

Matthew is the main songwriter in Harborcoat. Previously, he led The Pantones for more than a decade, and currently he writes songs and plays and sings in Lansing power pop outfit, The Stick Arounds. In addition, he is the owner and operator of Phonophore Records.

Harborcoat began as a songwriting outlet for Matthew in 2016 for output that didn’t fit with The Stick Arounds. The vision was initially a bedroom artistic venture, but a dear friend suggested Matthew make a real record, and Harborcoat became a functioning band that plays shows and records with an ever-evolving cast of musicians. Previously, Harborcoat issued the 2017 single, “See The Sun,” and the 2019 full-length, Brutal Gravity.

Harborcoat specialize in short stories with chords. The lyrics are novelistic and almost standalone pieces rife with emotive and well-crafted narratives. The band name is pulled from an early R.E.M. gem, and the music brims with nods to Matthew’s heroes. The songs recall the crunchy power pop and harmonies of Teenage Fanclub; the introspection and melodic storytelling of Billy Bragg; and sprinkled in are moments of 80’s esque Brit-Pop or working-class anthems. These influences, however, do not define the record, but are they are merely a strand of DNA in Harborcoat’s collective musical helix.

The songs on Joy Is Elusive are buoyant and energetic and are a powerful juxtaposition to the weighty lyric content. “I wanted there to be a sense of joy and excitement even though the lyrical themes are often terribly dark. There was a direct effort to play to that old maxim of ‘beautiful melodies telling me terrible things,’” Matthew admits. He continues: “On this record I wanted to write more intently about all of our unseen struggles and the baggage we travel with each day. There is a greater thread lyrically and musically rooted within the themes of the album and the fictional town in which they occur. As much as I cringe at the idea of a concept record, this is a record with a pretty clearly defined concept.”

The 12-song album is a cohesive and conceptually immersive collection that warrants a full album listening experience. That said, select record standouts include “Transit Town,” the title track, and “Where The River Bends.” “Transit Town” is a power-pop anthem with Who-style ringing guitars and a rich tapestry of sing-along harmony vocals. The song’s sugar rush is offset by the bummer of the fleeting nature of relationships in a college town. “The story here is of a self-contained world in a mid-sized industrial city not on an upswing where one person comes into town, they partner with someone for a period of time, and then move on, and that other person is stuck and doesn’t want to be where they are,” Matthew shares. This sentiment is epitomized by the lyric: This city is just a stepping stone/And so I guess am I/Everybody else has flown/I’ve got nowhere to fly.

The deeply emotive piano ballad, “Joy Is Elusive,” is a character-driven piece about a mentally ill sibling who does a stint at a state hospital, but is later returned to his family and they have to find a way to build a life together. The song is filled with poignant scene-setting lyrics such as: We picked you up in Traverse City, scars across your arms/Drove along the country roads, you stared out at the farms/Asked you twice if you were hungry you simply shook your head/We inquired if you were better this was all you said. The dynamic and imaginatively arranged literate rocker, “Where The River Bends,” paints a powerful picture of the terror of getting what you want.

The album was tracked at Matthew’s family cabin. Before the sessions began, his father died suddenly, and Matthew thought to cancel, but his family and friends convinced him to proceed with the sessions. “That week of recording was the first time in four weeks that I had managed to find any degree of happiness or hope,” he recalls. “It was cathartic, it was beautiful, and it was the perfect distraction.” (writeup c/o Phonophore Records)

More good stuff in September from GTG bands and friends! As always we’ve got a wide variety of stuff at The Avenue Cafe in Lansing (9/10 features The Hunky Newcomers):

Jeremy Porter has a solid solo acoustic run in the Midwest:

The Stick Arounds are also getting some Midwest action in:

Posted in Jeremy Porter and The Tucos, The Hunky Newcomers, The Stick Arounds, The Wild Honey Collective

On Friday July 9 Matt Carlson (the ol’ Harborcoat and Stick Around man himself) and Johnny Aimcrier will be playing at Brickhaven in Grand Ledge, MI. Tommy and Danielle from Wild Honey Collective will be joining them for a few songs and to do a couple of ours too.

Saturday July 10 will see Cavalcade play the first show at Pyramid Scheme in Grand Rapids since early 2020. Way to go, boys! Somehow, GTG-affiliated acts are weirdly ushering in the return of live music to the, er, weirdos of the Midwest. Case in point….

Saturday July 10 is also the let’s-not-overstate-it-too-much return of shows to the Avenue Cafe in Lansing, featuring The Hunky Newcomers, Foxgrave, and Jeremy Porter. Geez! That feels good to say. No cover, 21+, 9 PM, just… come and watch! Wow! There’s shows every Saturday in July at the Avenue, and they’ve all got a GTG flavor to them: Saturday July 17 RK Andrews from No Skull opens up for our friends Bloody Butterflies and Bubak, Saturday July 24 Nicholas Weltschmerz opens up for the debut show of the latest Josh David fronted band Frowntown, and on July 31 the Wild Honey Duo will open up for a night of music featuring Michigan mainstay Jen Sygit. Something for everyone, you’re welcome!

The extremely excellent new Waiting For The Click EP by The Stick Arounds features four songs, and the band has made videos for each of these songs. Check them all out below and get the EP directly from the band at bandcamp! These guys really know how to make the best out of a crummy year!

And don’t forget about their rippin’ cover of The Realists from This Must Be The Place!

In their 10 plus years as a band, Lansing Michigan’s The Stick Arounds have never shied away from the music that inspired them. Three full-length LPs and a dozen singles later, the influence of the songcraft of bands like Sloan, Teenage Fanclub, Big Star, and other power pop luminaries is as evident as ever on their new EP Waiting For The Click.

“We’re Not Even Close” is the painfully familiar tale of failed relationships, told in the most midwest way possible: through rock bombast akin to bands like Cheap Trick and The Replacements.

The vocal harmonies that have become part of the Stick Arounds signature sound are immediately apparent on “Easy To Take”, as is the Byrdsian guitar approach that harkens back to some of the band’s favorite classic country records and early country rock. Gram Parsons would have loved this.

Simultaneously a call for help and call to arms, “Ode To Kid Marine” is an open love letter to drowning your sorrows in a few beers and a favorite record. Named for a terrific solo Bob Pollard record, this track epitomizes the glory and inherent regret in blasting an album and drinking to make it through the night.

Four tight and taut songs make up this ten minute trip rooted deeply in harmony, threadbare honesty, and the enduring power of rock and roll.

Pre-order the thing at The Stick Arounds bandcamp.

Posted in The Stick Arounds 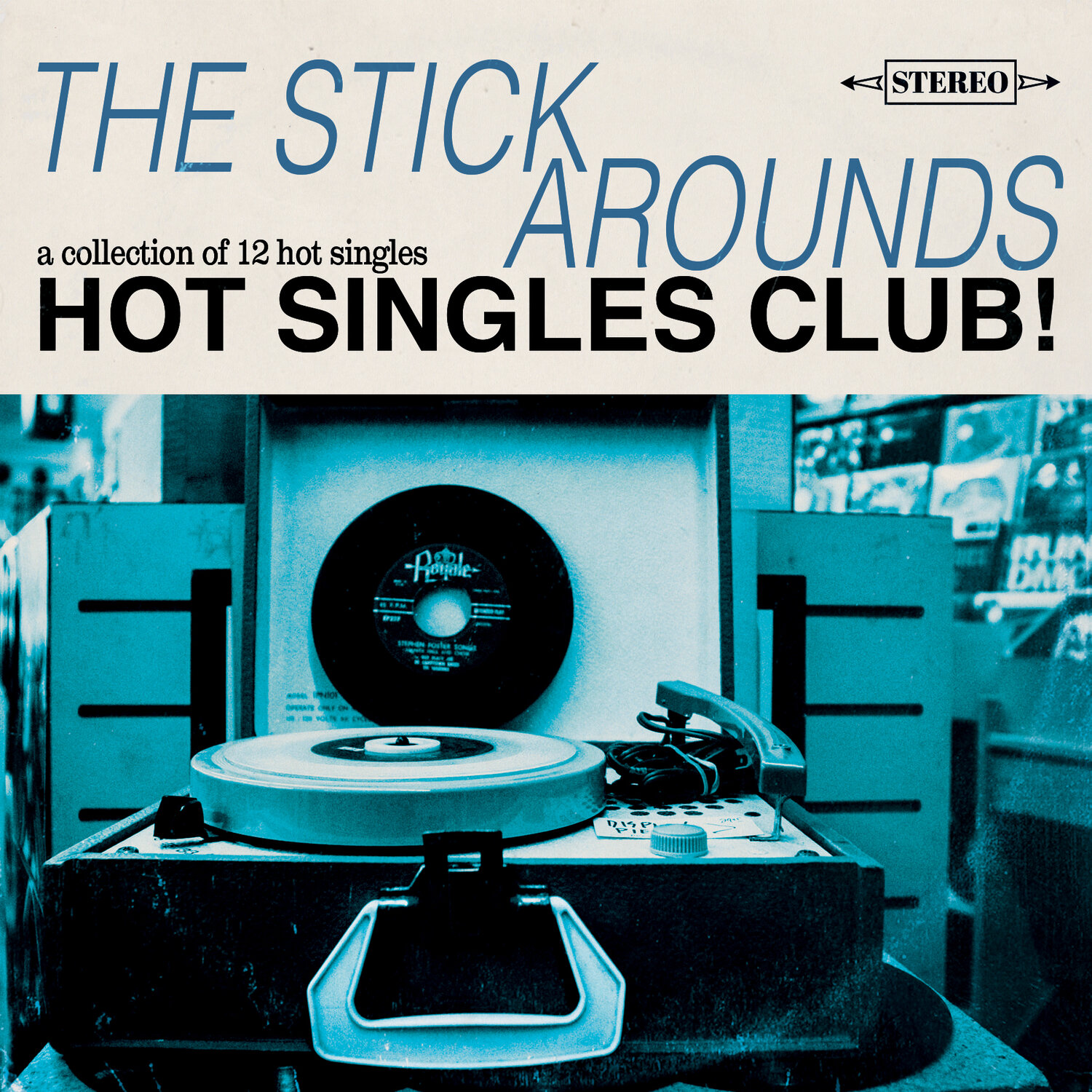 The Stick Arounds collection of Hot Singles is out digitally everywhere now and on CD – you’ve got til the end of the month to pre-order a vinyl copy! Do it!

Posted in The Stick Arounds

From the desk of The Stick Arounds:
We’ve taken all twelve of our singles from each month of 2019 and compiled them into one bitchin’ record. ‘Hot Singles Club’ is available now for pre-order on CD, Digital and Limited Edition Vinyl LP.

CD and Digital versions of ‘Hot Singles Club’ will be released on February 14, 2020.

The limited edition LP is a special pre-order only lathe cut vinyl. The vinyl version also includes an exclusive 12″ x 12″ poster, plus each record is hand signed and numbered by the band. You must pre-order to get the LP. Vinyl pre-orders are only available until Feb. 28, so secure your copy today. LPs are expected to ship in early May of 2020.

Pre-Order LP and CD at http://stickaroundsmusic.com/store

Everyone at GTG is very excited to have all of the Sticks’ singles in one place AND to try out this new short-run vinyl method. Hopefully this will be the first of many limited edition vinyl releases we can curate for the folks that want ’em!

Lansing: Drinking Mercury and The Stick Arounds (plus Plurals and Tucos) Shows!

Drinking Mercuy is releasing a new self-titled album at The Robin Theatre on November 23rd, with special guests When Particles Collide! 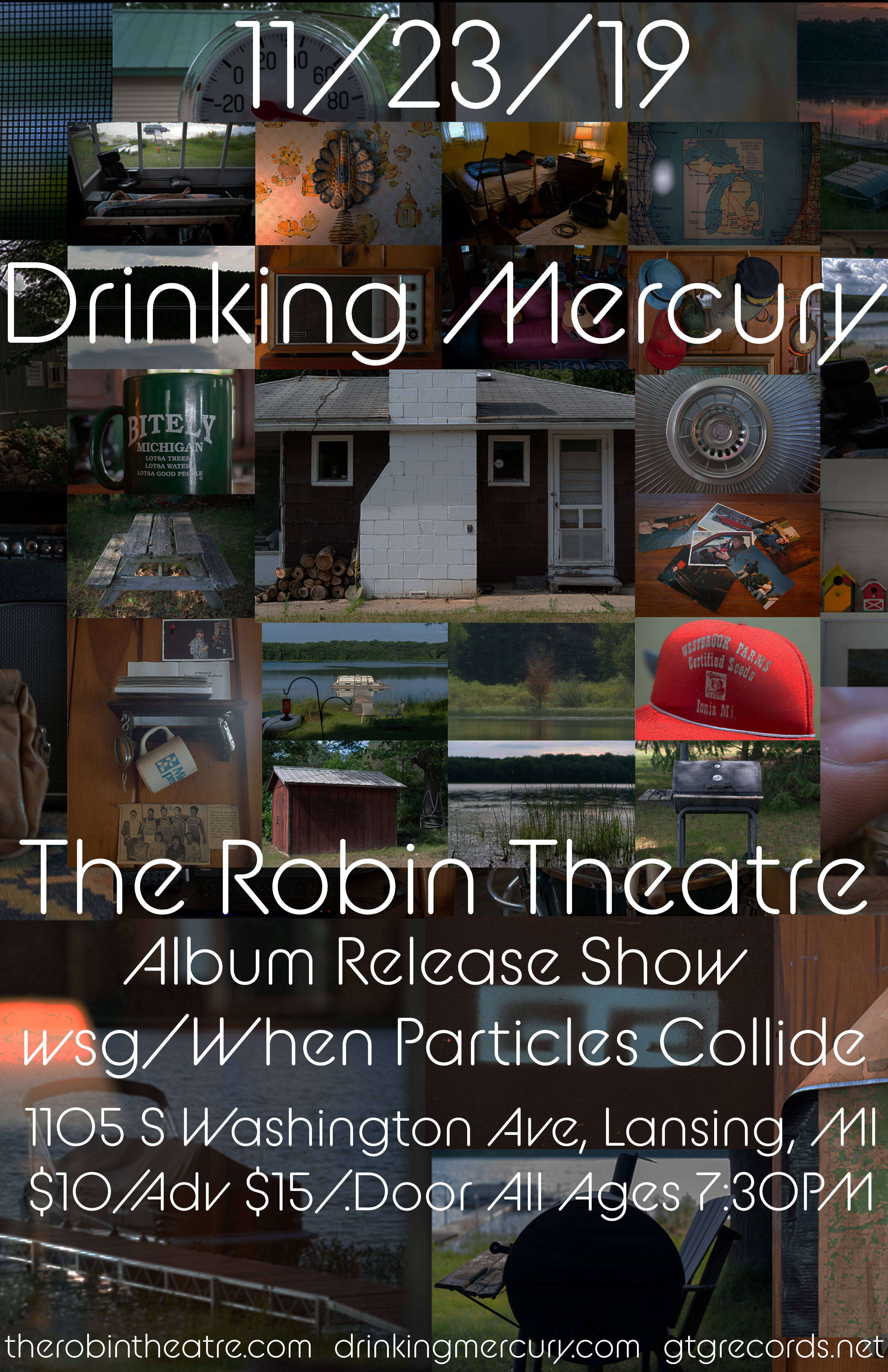 But first! The Stick Arounds are celebrating ten years as a band and they’re having a big ol’ shinding at The Avenue Cafe on Friday November 15! Joining the Sticks are GTG Family The Plurals, Jeremy Porter and the Tucos plus Detroit’s Popular Creeps! 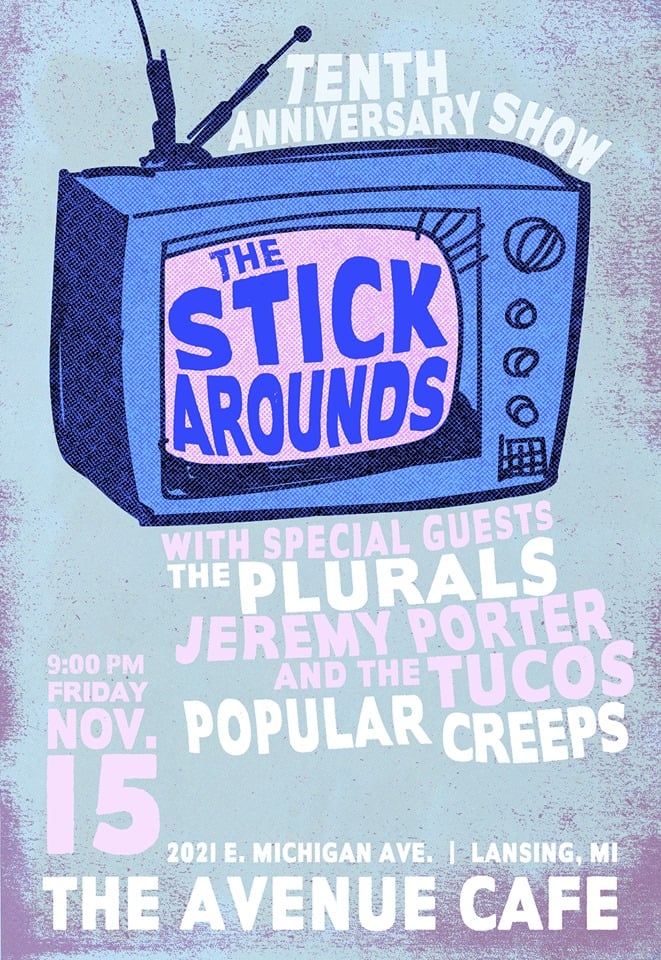 Posted in Drinking Mercury, Jeremy Porter and The Tucos, Lansing, Live, The Plurals, The Stick Arounds

The Stick Arounds – Ways To Hang On OUT NOW 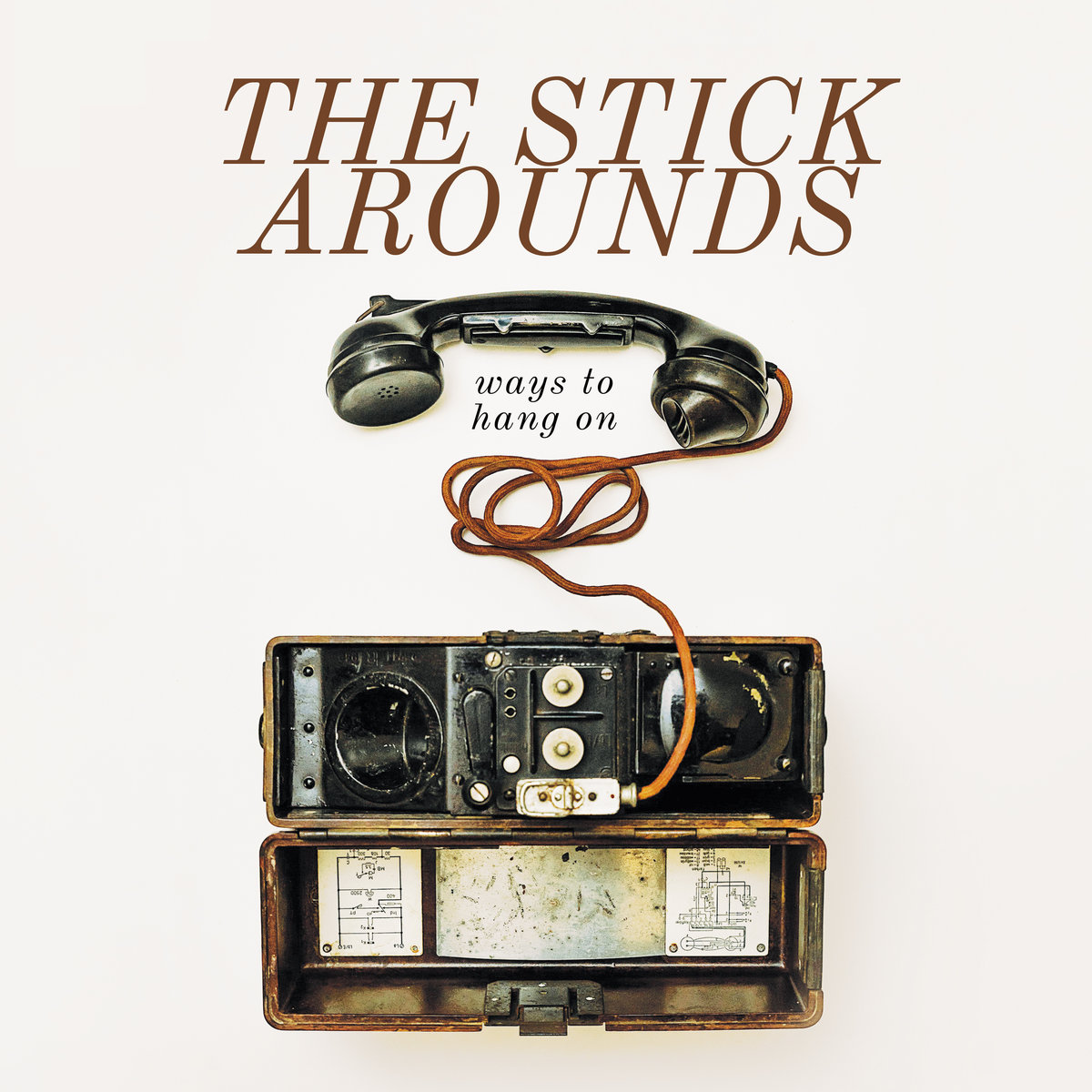 The 2nd LP from the Lansing masters of powerpop is now available everywhere. CD, vinyl, digital, Matt and Jeff knocking down your door and making you listen to them, you name it! An instant classic of melodic pop rock ‘n roll, Ways To Hang On is the result of a year of hard work from these Lansing gentleman and it definitely lives up to the expectations. Check it out!

Don’t let their scary demeanors intimidate you, The Stick Arounds are a nice group of Michigan powerpoppers and they’ve got a new record out 10/26. Check out their website for more info on how to get all the sweet swag and check out the video for their first single “Get U Back” below!

Tagged Best Album of 2018, Get U Back, Lansing, The Stick Arounds, ways to hang on