Drinking Mercury’s self-titled second album is now available digitally. Check it out above from GTG or stream/download at any of these other soulless places where the streaming and the downloading tends to happen:
Spotify
iTunes
Amazon
YouTube

Drinking Mercury – Catching Up To Me

Check out the first single from the new Drinking Mercury album, out this Friday! “Catching Up To Me,” like the rest of the self-titled album, was recorded in the dead of a Michigan summer at a cabin in Bitely, MI. The end result is warm and atmospheric and a new high for this band.

The album will be streaming everywhere on November 22, and the release party (with the always killer When Particles Collide) is Saturday at the Robin Theatre in Lansing.

OUT NOW: Drinking Mercury / The Soods

5 new songs apiece from one of the longest serving GTG bands and the newest GTG band! Drinking Mercury recorded something like 17 songs at a cabin in Bitely, MI over the course of a couple trips in the last year and this split has the first batch of tunes to be released from these sessions. In addition to the advance single “The Market” the remaining four songs feature all of the group’s songwriters as well as a new arrangement of a traditional song. The rest of the songs from the cabin sessions will be out later this year! The Soods debuted earlier this year with some low-key releases but are now taking off in a big way with this release, featuring a who’s who of Grand Rapids musical talent. Members of longtime outfits Elroy Meltzer, Lazy Genius, The Howlers, and more are featured throughout and the result is a shimmery, tightly arranged batch of indie pop songs with an economy that would make Bob Pollard proud. Check out the album on our bandcamp page, stream it on Spotify, order a CD from our store… have at it!

Posted in Drinking Mercury, The Soods

The debut album from Harborcoat is officially out today! Check it out below, and make sure to put GTG Fest on your calendars – Oct 11, 12, and 13, cuz that’s your next chance to see this group live. Let the GTG autumn begin! 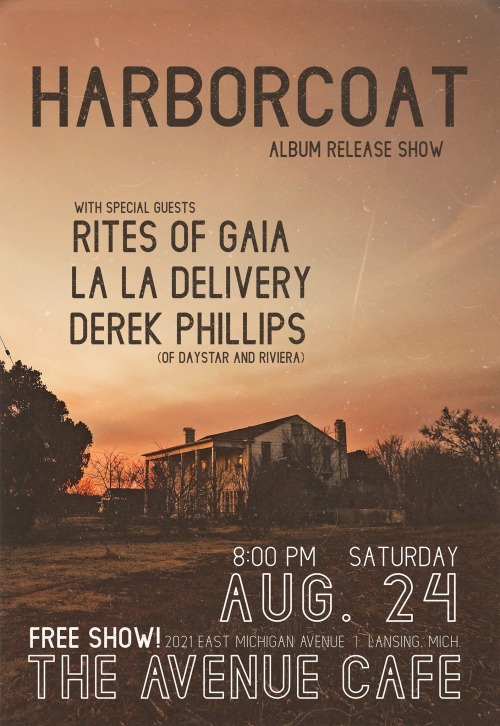 Harborcoat, the latest project from Matthew Carlson (The Stick Arounds, Pantones, et al) will be releasing their debut album this fall and are having a CD release party at The Avenue Cafe on August 24! The debut album, Brutal Gravity, is a 12 song “exploration [of] the quiet desperation, darkness, and inertia that can lie underneath the veneer of the oft-romanticized life in small-town/rural America” and features contributions from, among others, Carlson’s Stick Arounds bandmates and The Hat Madder’s Isaac Vander Schuur. Isaac’s mitts are actually all over this record as he engineered and produced it and you can feel a little bit of that Hat Madder grime throughout, which is welcome to the ears while the Hat Madder are on hiatus. In addition to scratching all kinds of GTG friend itches, the record basks nicely in the tradition of REM, Big Star, Guided By Voices, et al. Basically, it’s another Midwest-weirdo-pop classic from GTG! Check out the video for lead track “Missing On The 4th of July” below:

Get your CDs early at the album release show and stay tuned to the band’s socials for info on both the wider release AND a limited edition vinyl release. GTG124!

Posted in Album, Harborcoat, The Hat Madder, The Stick Arounds