Check it out! The video for Drinking Mercury’s new single “The Market” from the forthcoming split album with The Soods. The release party AND release date for the split is this Friday, 9/20! 5 new songs apiece from both of these acts, and you can catch ’em live at The Intersection in Grand Rapids to celebrate the release! 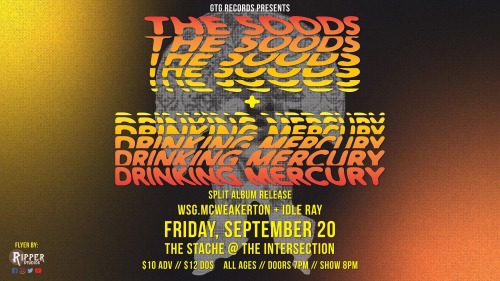 Out Now! Split record featuring four new songs apiece from The Sexy Murders and Drinking Mercury. Limited run of clear vinyl will be out in March too! We’ve been tinkering with this release for a little awhile now and we’re very excited to set it out into the world. This is the first long-from release from Drinking Mercury since 2011’s Orcades and while there have been some memorable compilation appearances from this band in the interim it’s nice to have a collection of tunes from the original GTG band in 2018. This record also doubles as the debut release from The Sexy Murders, the latest project to feature Crooked Sound’s Eric Merckling, in collaboration with his old Calliope bandmate Andy Dryer and perennial GTG player Hattie Danby. Their contributions to the record do recall the first two Calliope albums , and Eric’s Crooked Sound project releases but they also have their own unique vibe, showcasing the creativity and songwriting chops of these Michigan music veterans.

At the bandcamp link you can order the vinyl version, which is a very limited edition lathe-cut clear 12-inch manufactured by Little Elephant Lathe Cuts in Toledo. The records are packaged in an origami-style fold with artwork unique to the vinyl version. Only a couple dozen of these were pressed so get on it if you want one! They’ll ship out in March and we’ll also have a couple release parties for the record then too. Stay tuned!

GTG is very happy to follow-up the Bong Mountain / Junior Battles split cassette from this spring with a four band split cassette with two new songs apiece from Bong Mountain, Protected Left, Bluff Called, and GTG warhorses Frank and Earnest (with their first new material since 2014’s Modern Country). Two California bands, two Michigan bands, eight songs of shout-along, high energy punk rock, and it’s out this Friday! You can pre-order copies of the four way split cassette How Much Art Can You Fake? right now and the fine folks at For The Love of Punk are streaming the whole thing this week too!