A bunch of us basically accidentally booked a bunch of shows this week in Lansing, leading to a sort of springtime GTG Fest! It’s about time this spring thing happened too, we were getting some of the most wicked Cabin Fever to date. 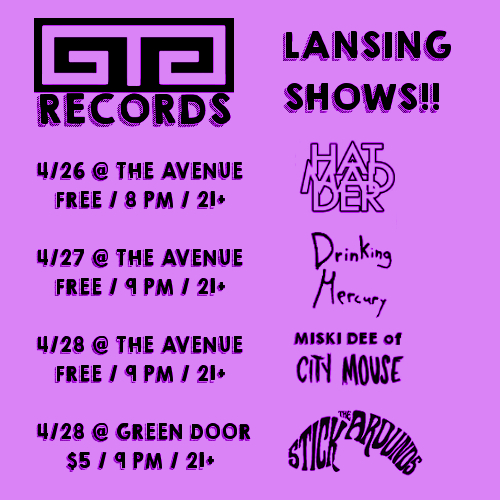 Thursday April 26th The Hat Madder – with their freshly released vinyl edition of Rotting On The Vine – will be rocking out at The Avenue Cafe alongside Connecticut piano ‘n art duo Pocket Vinyl, Grand Rapids punk people The Quirk, and treasured locals Scary Women and Blaine & His Keyboard. The next day, April 27th, Drinking Mercury – also with their freshly released vinyl split with The Sexy Murders – will be gracing the Avenue stage with our old friends The Jackpine Snag and new friends Dirty Deville. The Avenue gets another dose of fun when, Saturday April 28th, Miski from City Mouse hosts and performs a night of punk rock featuring Heart and Lung from Cleveland and Lansing rascals Stop Bobby Hatch, Foxhole, and an acoustic set from Dasterds. Finally, just down the block, The Stick Arounds will be playing at Green Door on April 28th with Moto and Cardboard Bullies (which includes, among others, Chris from Narc Out the Reds/ The Hat Madder). Madness! Great accidental work everyone!