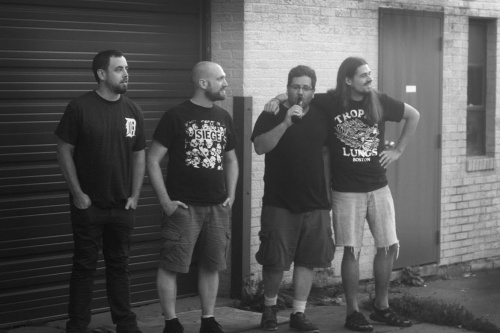 The soundtrack by and for a bunch of dudes hanging out, Frank and Earnest has gone through a few configurations since 2008 but has always been an outlet of unpretentious music that oozes Lansing, Michigan. Originally conceived as an acoustic project by founding guitarist Otis Pierce, the band has had Ben Hassenger (guitar, vocals), Paul Wittman (bass, vocals), and Ryan Horky (drums) as its core since spring 2009, even after Otis left the band in fall 2013. The multiple songwriters and the devil-may-care live show (on any given night you don’t know if they’re going to blast through a tight clutch of songs, drunkenly talk for most of their set or show up as a satirical country band) has earned the band a following and made them a fixture of Michigan music to the point of bafflingly being the only DIY punk band to be mentioned on the Lansing wikipedia page. Their debut EP Old Francis, full of sincere and passionate melodic punk, showed up in the summer of 2010, winning both critical acclaim and blogger vile, with the split 7-inch Funemployment following in 2011, and the full-length Modern Country in 2014. Not bad for a bunch of self-described “stupid guys” who basically started a band as an excuse to hang out.